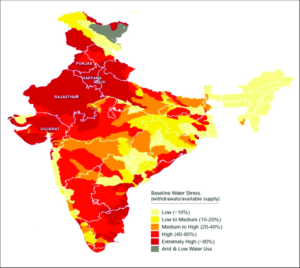 In this blog, I would like to talk about India’s current situation regarding the water crisis and some ongoing projects and partnerships in order to solve the problems.

According to the National Institution for Transforming India (NITI Aayog), about 600 million people face high-to-extreme water stress in India. However, three-quarters of households do not have safe drinking water facilities, and 84 percent of rural households do not have the accessibility of piped water. The current estimation data reveal that India’s demand for water will be double the available water supply by 2030. On the other hand, it is considered ranked 120 among 122 countries in terms of the water quality index.

However, it has been found that about 70 percent of water bodies in India are highly contaminated with organic, bacterial and other hazardous pollutants. Therefore, about 200,000 people die every year due to a lack of access to clean water.

According to the World Bank report, for the water scarcity in India, several factors are involved, including climate change, unsustainable water systems, rapid urbanization, the expansion of irrigation, rising demand for water from the industrial, domestic, and power sectors.

Several national and international bodies have been working to tackle the situation and implement a sustainable water system in India.

For example, ‘Jal Shakti Abhiyan’ has been launched in collaboration with the Government of India and state governments. It is a time-bound and mission-mode water conservation campaign focusing on highly water-stressed districts and blocks in India. The Department of Drinking Water and Sanitation of India has launched the ‘Jal Jeevan Mission’ to provide sustainable drinking water supply in all schools and households across the country by 2024. The Jal Jeevan Mission has already been providing clean water to 20 million families in India. Recently, India’s government has announced ‘Atal Bhujal Yojana’ to improve the groundwater management systems in seven Indian states.

The India-EU Water Partnership (IEWP), through its research and innovation programme ‘Horizon 2020’ was launched to build up India and the EU’s technological, scientific and management capabilities in water issues. There are several projects under it, such as ‘PAVITRA GANGA’, ‘PANIWATER’, ‘LOTUS’, PAVITR”, etc. These projects’ objective is to tackle the urgent water-related challenges in India’s urban and peri-urban sites, including wastewater treatment, improving the quality of drinking water, water resources management, etc. Also, several World Bank projects support India’s efforts in the water sector, such as the National Mission for Clean Ganga, the Dam Rehabilitation and Improvement Project, National Hydrology Project, etc. There are several other active bilateral agreements between India and foreign countries working on various water projects, such as Indo French Water Network, Indo German Water Partnership, India British MOU on Water, and so on.