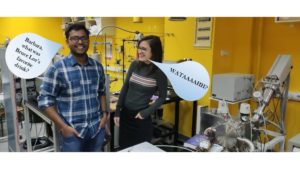 Hi readers! We are Barbara and Amit from Croatia and India, respectively, but you may be wondering what brings us together. Well, we are ESRs of the Nowelties ITN project and today we want to show you some facts on water and our different perceptions. For example, did you know that more people in India have access to phones than to safe drinking water? Or that, on the other hand, Croatia tops the EU standards with 27,330 cubic meters of water per capita?

First, let us give you a couple of facts related to the countries we are come from.

India accounts for about 2.5% of the total surface world area, with eight major rivers and with around 400 rivers within its borders. It has approximately 16% of the total global population, while it contributes only 4% of the world’s freshwater water resources.

On the other side of the world, in the heart of Europe, is Croatia. Located among the lowlands and mountains, along the Adriatic Sea, and it is about 58 times smaller than India. It has around 30 major rivers and 25 billion cubic meters of surface water supply.

Considering only these numbers, do you think that both countries share the same water issues?

One of the problems is the uneven distribution of water resources among countries as well as worldwide. This leads to the dwindling availability of clean water resources for use. It has been estimated that around 47% of the global population lives in such areas where people suffer from water scarcity.

For example, due to the topographical, hydrological, and other constraints, only 60% of India’s natural water resources (surface and groundwater) can be exploited for various applications and is mainly used for irrigation purposes. However, in one part of Croatia, numerous underground stream flows are hard to determine due to the presence of karst. People do not influence water distribution, and it makes the management of water resources difficult.

Besides natural laws, water management is a man-made practice that includes control of optimum use of water resources. Its idea is to minimize the negative impact on life and simultaneously maximize the beneficial use of water.

Regarding this, India is reputed to be one of the world’s most water-stressed countries due to the poor water management with available treatment capacity for approximately 37% of its wastewater streams (Central Pollution Control Board report, 2015). Considering that India is the third-largest exporter of groundwater globally, we all can see that something is missing in this equation. Nowadays, in various parts of India, people are still using untreated groundwater for drinking, even though it contains much higher concentrations of inorganic (particularly fluoride and arsenic) as well as organic compounds and bacteria than permitted.

On the other hand, Croatia belongs to a group of countries where water issues are still not a limiting factor of development. The Croatian potable water supply consists of 86% groundwater and 14% surface water, and the tap water is safe for drinking. We can consider the relatively high quality of both surface and groundwater as an advantage. Still, problems occur in summer when the natural discharge is small, the groundwater level low, and water demand increase due to tourism and enhanced irrigation.

What can we do about it?

As young scientists, we need to encourage the re-use of water and promote sustainable water fashion. We need to find a way to make available technologies suitable for use in areas of diverse conditions. Although there are enough developed methods for water treatment, there is always room for new ideas and improvement. You know how they say – there is additional space in the glass visually full of rocks. You can always add some more sand or even sugar to improve this fullness.

With so many differences in the way of living, water is a common commodity that holds us together. It is something that we all need to share and take care of to live a healthy life. The water you drink today had probably seen a good part of the world before it “ended up” in your glass. So, now it’s your turn, as a citizen, to be aware of not just water consumption but also the water cycle and its footprint in general.

We conclude with two fun facts.

Barbara’s amusement in the differences between Indian and Croatian cultures lies in their ways of preparing food. Indians make almost everything too spicy for the palate of a Croatian girl, so all potable water in the world won’t help her survive a traditional Indian meal.

On the other hand, Amit feels more comfortable about tap water here in Europe than where he grew up in India. This is a good motivation for him to find appropriate solutions for Indian “water worries”, and have this comfort at home too.

Aaand, what is your favorite drink? 🙂