25 Sep Is Water Accessible to Everyone? 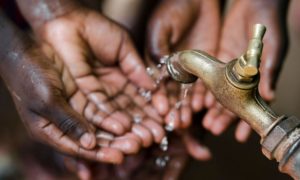 Do you know how many days could a human being surviving without water or food?

According to several scientific studies, a person could survive up to two months without food, just drinking water. However, the survival probabilities are highly reduced to few days when any drop of water is not drunk. The reason is that the human body is mainly composed of water (around 60%).

The purpose for which I started this blog article with the above question is that I would like to emphasize how important the water is. I want to make you aware of how the lack of safe drinking water and sanitation systems in many regions contribute to broadening social inequality.

Water is essential for life. It is so crucial that in 2010 the United Nations General Assembly, through Resolution 64/292, declared the water as a human right. Although many efforts have been made over the last years, still around 785 million people do not have access to drinking water, and 2 billion people drink contaminated water, according to the World Health Organization.

In the case of my home country (Colombia), over the past decades, the coverage of sanitation and water supply services increased by 82% and 94%, respectively. However, this reality only applies to urban regions and the main cities. For rural areas and small towns either they do not have safe drinking water or not have access to water. In contrast, we are one of the water-wealthiest countries, and most of the freshwater for the cities come from rural areas.

In rural communities, which are mainly dedicated to agriculture (one of the most water-consuming sector), additional to lack of safe water for their activities, some groups (legal and illegal) threaten them to control the water distribution to use for private consumption in mining or hydropower plants. Even in some cases, the communities are forced to leave the land, and their leaders are killed just by claiming the right to the water.

In other less critical scenarios, although the water access infrastructure is included within the National Development Plans, the corruption and private interests hinder the complete development of the projects. In the end, the communities must walk long distances to collect some water, and then apply rudimentary treatments. Besides, due to the absence of sanitation systems and environmental education, in these remote territories, usually, the wastewater is discharged into rivers and creeks, promoting water pollution for downstream communities. These repetitive cycles make that water access get worse over time, increasing social inequality in rural communities. If we look at other developing countries, we will find out that the circumstances do not change too much.

Although the outlook does not seem easy, we should not give up and continue working in new water technologies, as we do in the Nowelties team, to provide access to safe water for everyone. However, reducing social inequality and improving the health of communities requires not just the use of specific water treatment, also requires a considerable commitment from Governments and stakeholders to ensure an integral implementation of sanitation and drinking water systems.