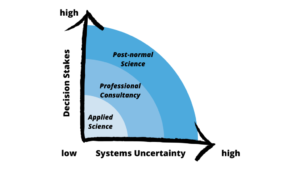 We live in a world of progress.

The uncertainty provides the basis for the distinction between experts and laypeople.

In this distinction lies a communication problem where these two parties have difficulties understanding each other. This miscommunication was properly described in the recently released movie “Don’t Look Up”.

The two main protagonists (an astronomy professor, Randall, and his PhD student, Kate) attempt to warn politics and the general public of the imminent danger of a comet impacting the Earth, which will extinguish humankind. However, the two scientists initially based their communication style on facts and observations rather than on the impacts on people’s lives and humanity’s future.

The contrast between hard values (i.e., facts) and soft values (i.e., subjective perceptions) is a recurring theme even in today’s COVID-19 pandemic. Or as well for climate change, nuclear energy, and the list can go on and on.

So, the sanitary, environmental, or even disaster risks become breeding ground for political and cultural clashes.

According to post-normal science (PNS), these are all examples that fall within the specific situation where “facts are uncertain, values in dispute, stakes high and decisions urgent”. [1]

The “normal” science is seen as problem-solving driven, where experts can adequately achieve a solution since physics laws can describe nature.

For PNS, this is not enough: it requires science to acknowledge different perspectives beyond the facts.

For this reason, alongside the applied scientist or the professional consultant figure, there may be that of the PNS researcher.

This figure will not challenge the professionalism or knowledge of the experts, but the quality of their work in these new contexts [1].

Such PNS researchers will not be just experts, closed in their sphere of confrontation with their peers, rather researchers who know how to communicate the message to a broader audience. On the one hand, they will have the expertise to understand and critically assess the problem, and on the other, to establish an open dialogue with all the parties involved.

They will facilitate the understanding of environmental issues in their communities and ultimately improve society based on transparency, interpretation, advocacy, and participation. [2]

The same principle applies to efforts made towards sharing knowledge, such as encouraging the use of Open Access. Thus, allowing citizens to be involved in the scientific process and discoveries. [3]

Science remains the tool to investigate reality, i.e., the facts, not to determine the truth. Problems involving values and social and political aspects cannot be solved by science itself.