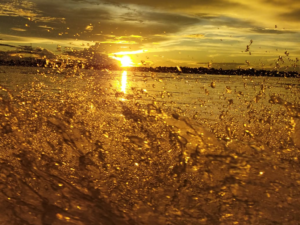 Today in our blog contribution, we want to discuss on the tap water we get and tell you some interesting facts.

Before answering these questions, let us introduce ourselves. We are Camilo and Edwin, two Colombians living and doing a PhD in water treatment technologies in Europe. Camilo has been working mainly in Croatia and Edwin in Germany. Then we found each other in Girona (Spain) as a part of our project, where we shared some of our experiences living abroad.

Living abroad, connected by the same culture and passion for water and environmental protection, we decided today to talk a little about water, which is more than what we are drinking. You may wonder about where it is coming from and where it is going to, but water in the world is highly affected by human actions, and being aware of it, as citizens, would define its future impact in our lives.

Let’s start with this fact: the total volume of water on our planet has always been the same and just recycled every day through the water cycle. This water cycle distributes the water worldwide in the form of rivers, lakes, aquifers, etc., from where we collect and treat it to make it drinkable.

Water is the universal solvent and it would always have several substances within. Two drops of water aren’t the same! You can’t drink water from the ocean because it’s too salty. Tap water in different cities doesn’t taste the same. Water from a river affected by human activity will change as long as it goes to the ocean. The water cycle is already affected by humans, as water contamination seems to be in our genes. Our impact on climate is changing the path of the cycle as well.

We might have a lot of water, but we can’t use it all. More than 97 % of the water is already salty, and most of the remaining is locked up into the ice or the ground. Less than 0.03 % is available as freshwater. We are not doing very well with the good water. We think that we have too much in cities and use it for everything, assuming it will be as good forever. In farms, it goes through the lands while being absorbed by plants and catching all kinds of pesticides and substances that nature is not prepared for downstream in the river.

Before you take the glass of water you’re drinking now, do you know where it is coming from? Depending on your city and country, it could be water from the dept ground, a dam in the mountains, or a fancy facility for seawater purification. There are also people without that privilege. They have to carry their water from a well, a river, or wait for the rain to fall on their roof to catch some. Apart from drinking, what do we do with our water?

After we use it, usually the (waste)water goes to the sewer, from where in some cases is adequately treated and then released into the environment. Further purification happens by mother nature through the water cycle. In other cases, it is just discharged without any treatment, polluting even our water sources.

In developed and prosperous nations, we could say that nearly the entire population has access to tap water. Moreover, there are (waste)water treatment plants where water consumed in the future is protected. It is also observed that their legislation is stricter and focused on water reuse. Meanwhile, not all populations have access to water or sanitation systems in developing countries. Apart from the lack of a sanitation system, usually, there is no waste-water treatment, polluting lakes, rivers, and aquifers, and making the water access in the future even worse.

One of the contrasts that we have seen between a country such as Colombia and any country in Europe was looking at people swimming, fishing, and enjoying rivers in big European cities. Such unique and joyful activities are not possible in our country because the rivers that cross our big cities are thoroughly contaminated, almost deadly.

We think that part of the problem contributing to the lack of access to the water or sanitation system is corruption. Politicians in developing countries put the economy and “progress” before life. They prioritize mining (legal or illegal) over drinking water or allow big companies to discharge polluted water without any penalty. This kind of thinking will affect more the access to water and probably will trigger some water conflicts.

Unawareness of water and environmental care affects water access worldwide, creating water stress and scarcity. You might think, how the water scarcity in another country far away from my place could affect me? The fact is that everything in the world is connected, not just by the internet or transportation. As we said before, the water cycle distributes water worldwide, and the changes that happen in one hemisphere will affect the other. Indeed, we can observe that while some regions are flooding, on the other side of the planet have been affected by a severe drought.

We think that politics related to water will be just more and more important in coming years. No water, no life, and there are already conflicts happening worldwide. In our country, some people think that it is more valuable to do mining rather than ecological activities; Mexico missing Colorado’s river; unequal water distribution in the middle east; and just the fact that there will not be enough water for all of us with our current lifestyle*.

Despite that the future looks hopeless, there are several actions that we as citizens, could implement to change the current situation and give a chance to the future generations to enjoy what we have. We could start pushing our politicians to develop and implement policies that protect the water and promote greener and sustainable economies. We could use products that save water and ban the companies that pollute the water and environment. We could reduce meat consumption and eat seasonal vegetables and fruits. We could take a shorter shower, etc. So, our future is in our hands, and the sum of all small daily changes will make it better.