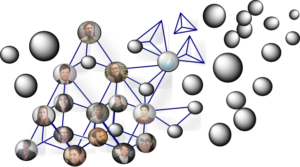 In science, all observations perceived with our senses or the machines we build are the base for theories we create to understand and transform the world. The increasing knowledge and constantly refined theories make specialization into disciplines inevitable. I graduated in chemistry: the discipline of the transitions of matter.

The underlying rules of bonding between atoms, ions, and molecules eventually making up the world we live in have been studied, postulated, discarded, and refined for centuries. But in not much more than 100 years, our perception of matter led from the raisin cake theory to the possibility to calculate and predict bonding states with quantum mechanics equations. It becomes evident that it is impossible to master every aspect even in one discipline, forcing young scientists to decide which path to thrive on. For me, it became environmental chemistry paved with some nanotechnology.

The German novelist Johann Wolfgang von Goethe, who did not have to worry if his brain was made of raisin cake since he lived 100 years before this atom model, could still be described as a polymath. He was not only educated but also productive in the fields of law, literature, and natural sciences. Since polymathy is impossible to achieve in our complex modern world, scientists nowadays form networks to support each other in developing new ideas and technologies. Innovations are often a result of interdisciplinarity. Similarly, our Network “NOWELTIES” brings scientists with different backgrounds and aims together to achieve new ways to synthesize and apply materials and processes for more efficient wastewater treatment.

In 1809, Goethe wrote the novel “elective affinities” (German: “Wahlverwandschaften”) describing the fate of a happily married couple which decides that both invite someone to live with them in their remote estate. Both get attracted to the invitee of their partner, leading to their complete disaffection and subsequent separation. Goethe explicitly adapts the latest theory of chemical reactions as an allegory to depict the transience of human bonds. What allegories would he have found to describe our modern ways of interaction?

Apart from the apparent benefits of networks, the term sounds somehow also lifeless, as if we as participants are building blocks to be glued together in the most efficient way to build up a working construct. Just like the functional (nano-)materials some of us PhD students are exploring. In modern Chemistry, unusual bonding states between atoms can be stabilized and studied in frozen gas matrices. These bonds immediately disintegrate when brought to normal conditions. Many connections we make during our nomadic life we try to conserve in social networks. But having moved between several countries, these bonds become more and more artificial and unstable as further you move away both in space and in mindset. (see also Danilo’s Blog)

The initiation of a human bond could also be described with theories from chemistry. Even though there is an affinity between two strangers, the initial prejudice against the unknown is the activation energy that must be overcome to form new bonds of friendship. (Regarding activation energy, Edwin has shared some thoughts too). Social distancing protocols act as an inhibitor of creating those bonds in a new environment. I felt pretty isolated in the first month of my secondment in Switzerland since it was almost impossible to interact with my colleagues and practically forbidden to meet strangers. Virtual bonds helped but were no complete substitute for conversations with real people. The situation improved and I finally made friends. One of my colleagues told me that he stopped to relate too much to new students and workers arriving at the lab when I was about to leave. Too soon, they would be gone again. I can understand this strategy of self-protection, but as Danilo, I have to object.

Conversely to chemistry, the strongest bonds you create with people are not attributed to the most favorable state of energy, motivated only by selective egoism. Inspiring friendships are seldomly formed in optimized conditions, as a chemist would design them. They’re the bonds that are hard to maintain and require effort beyond the selective liking of each other`s stories in social networks that have the chance to survive the many transitions in life. Bonds formed despite the mutual awareness of their vanity. Conversely to chemistry, where the balance of masses and energy is a fundamental principle, even the dissociation of human bonds can leave both parties with more energy and knowledge than both individuals had before their connection.