29 Jan The Dual Nature of Rivers 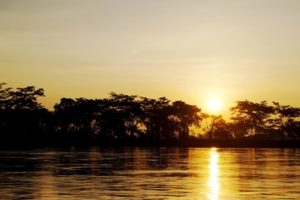 Hello everybody, I want to use this space to talk about one of the available freshwater forms that bring us life but sometimes bring death: the rivers. What kind of emotions do they evocate on you?

In some ancient cultures, the rivers are considered the Earth’s veins in which the water flows to bring life. Rivers have been the motor that allowed civilization to develop and grow. It was possible to contact different communities, exchange products, and even cultures, enriching the riverside towns’ lives. In many nations today, rivers are still an essential part of the economy. They are medium for product transportation to the seas’ main ports.

On the other hand, rivers have been the cause of conflict between nations that claim the right to them. One example of this is what is happening right now in the Nile river, where Ethiopia and Egypt disagree about access to it. Ethiopia is building a huge dam to produce electricity that will improve its economy, while Egypt argues the dam filling will create a severe drought that could affect their population survival because the Nile river represents 90% of their water supply.

Additionally, because of climate change and lack of planning, the riverside communities are endangered by flooding or drought, threatening their economy and lives. These flooding or drought are counted by dozens in the last year worldwide, becoming more frequent every year. Last year in Paraguay, its whole economy strongly damaged by a heavy drought of its main river; since more than 50% of importation and exportation are done through the river.

In my home country (Colombia), we have around 42 rivers that have built our economy, traditions and cultures. Among them, the Magdalena river is the main Colombian river. It has particular importance for what it represents in our history. It is also considered Colombia’s national heritage. This river borns in the Colombian massif and flows around 1500 km before reaching the Caribbean sea. Even, Gabriel Garcia Marquez described it in his book “Love in the Time of Cholera”.

Since pre-Columbian times, the river provided food to indigenous people and connected them. In colonization, the Magdalena river was used as a means of transportation from the Caribbean sea to the capital and other cities and allowed Spaniards to explore other territories. The river is still an essential route of product transportation between the riverside towns.

Despite the prosperity and development that it has brought, the Magdalena river also brings some tragedies. Ten years ago, the river flooded more than 35.000 hectares (around 32.000 soccer fields) and dammed about 120.000 inhabitants, devastating thousands of houses and crops. Also, the Magdalena river considered “the biggest cemetery of Colombia” because most of the killed people in the Colombian conflict were thrown to the river.

Fortunately, after signing the peace agreement in 2016, people living along the Magdalena river started to see this moment as an opportunity to have a peaceful life, express their culture and traditions, and heal through the river the scars that conflict has left.

And answering the initial question, the rivers evocate me peace, prosperity, and continuous evolution.