23 Jul Why Water Quality in Serbia Needs to Improve? 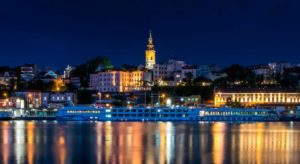 Why water quality in Serbia needs to improve?

Hello readers! It has been almost two years being a PhD student in Belgrade. In this week’s blog, I would like to share a few pieces of information about water quality in Serbia.

In the beginning, let me give you a small introduction about the country itself. Serbia is a landlocked country, with about 92% of the land located within the Danube River Basin. Serbia is a small county in Europe with roughly 7 million people. Around 24% of people live in the capital city – Belgrade. Many people argue that Balkan countries are one of the most attractive destinations in the world. There is no doubt about Serbia. It has vibrant and unique natural beauty. The country has various national parks, stunning monuments, nature reserves, whereas cities are without the hustle and bustle. It has been recognized as a 159 World’s Centers of Biodiversity.

In terms of service coverage, Serbia has better connectivity with access to piped water (about 90%) as well as flush toilets (about 93%). On the other hand, most of the tap water in Serbia is safe and drinkable.

However, water pollution is one of the main issues inside the country. The rivers are polluted by untreated wastewater from Serbia’s cities. It was found that Serbia’s capital city ends up with around 190 million m3 of wastewater (which is almost equivalent to a volume of 60,000 Olympic-sized swimming pools) into the rivers every year. Furthermore, the effluents from industrial activity, agricultural activities, and household sewage are the main sources of wastewater. Around 33% of the city’s population doesn’t have access to sewage systems. However, just over 48% of Serbia’s population is connected to sewage systems. Others rely on the septic tanks where it emptied by trucks and sewage dumped into the river. In Belgrade, the number of households connected to sewage systems is only 85%, which is less than in other European cities.

Do you know that none of the few Serbian wastewater treatment plants are located in Belgrade?

Belgrade is the only European capital city situated on the Danube River Basin without any wastewater treatment plant. In Serbia, only 28 towns have a municipal wastewater treatment plant, whereas some major cities do not have one. According to the survey from 2019, it was found that the whole country treats only 16% of its wastewater every year. The data also shows that only about 40 wastewater facilities are available in 168 cities and municipalities, and many are not operational. Due to the lack of treatment facilities, Serbia’s industries just treat over 50% of their wastewater.

Various organic pollutants, such as perfluorinated compounds, organic dyes, pharmaceuticals, and pesticides, have been found in trace amounts in groundwater and rivers and their tributaries in Serbia. Several sources, such as untreated domestic, agricultural, and industrial effluents, are responsible for discharging the pollutants into water bodies. These pollutants can have negative consequences on environmental and public health and affect lower productivity of agricultural land.

In order to tackle the situation, the Serbian National Environmental Strategy plans to improve the existing infrastructure, increase the number of sewage networks, and build more wastewater treatment plants in 20 to 30 large hotspot locations. The government of Serbia has announced that 70 municipalities around the country will get access to water purifying plants and sewage systems. The Belgrade city authority has an agreement with the international community to build wastewater treatment plants. There is a lot of work to be done in the Serbian water sector, and there are so many opportunities to engage, to connect, and to share knowledge, ideas and visions, to establish a vast network and global platform of water professionals related to all areas of the water sector, including water and wastewater treatment, groundwater, etc.