19 Mar World Water Day: Facts and Tips to Save Water 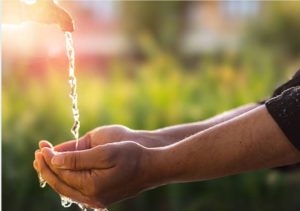 Our NOWELTIES project logo is a drop of water. This drop starts from green and ends up in clear blue colour. As you may know, the project’s whole idea is to provide some new technologies to clean the wastewater efficiently.

Many other scientific projects worldwide are also related to water. It’s a fact that a large sum of money (millions of $) has been spending on investigations related to water in any field. That can be (waste)water treatment, water reuse, water management, water monitoring, human health, etc.

But why people keep spending so much money on a good that will never disappear from Earth?

The answer is that water pollution is a global problem confronted daily by a great proportion of the human population and livestock. A problem that brings a lot of challenges in our everyday life. But let’s check some interesting facts about water and water pollution.

Water! What could be more important than this element?

2. You can find it everywhere as water continually changes location and state. Sometimes it’s a liquid (oceans, lakes, rain, groundwater), a solid (iceberg, snow, ice), or a gas (water vapor such as steam).

3. Only 2.5% of the total water on Earth is freshwater when 70% of the Earth’s surface is covered by water. In fact, if you imagine that all the water on Earth could fit into a one-liter milk carton, it would all be ocean water except for only two tablespoons of freshwater.

4. 80% of the water pollution is caused due to domestic sewage. This is because more than 80% of sewage is discharged untreated in developing countries, polluting rivers, lakes, and coastal areas.

5. Every day, 2 million tons of sewage and industrial and agricultural waste are discharged into the world’s water (UN WWAP 2003), the equivalent of the weight of the entire human population of 6.8 billion people.

6. Asia holds the prize of the continent with the highest number of contaminated rivers, mainly of bacteria from human waste. The Ganges river in India is considered the most polluted river globally and contains dirt, garbage, dead animals, and humans.

7. More than 8 billion kilograms (equivalent to 40 large cruise ships) of trash, mainly plastic, end up in the oceans every year.

8. Contaminated water is the leading cause of various diseases such as cholera and typhus.

9. An average of 250 million people suffers from water-borne diseases each year. According to the World Health Organization and UNICEF, nearly 2.5 billion people do not have access to valuable health care.

10. Every year, more people die from unsafe water than from all forms of violence, including war. Water pollution kills around 10,000 people every day – that’s 3.6 million people every year

BONUS: By switching from bottled water to tap water, a household of four may save on average €500 per year. Bottled water is around 40 times more expensive than tap water (more info here)

You understand fresh and clean water is a valuable resource. Water pollution and contamination are some of the worst enemies of human health. A person can survive without water only for three days (on average). Having access to clean water for irrigational or drinking water purposes is extremely important. The United Nations recognized it as a human right. It’s our duty to preserve the only human right that gives us life. Let’s be conscious and don’t violate it.

What can we (as individuals) do to help?

· Be aware of the amount of water you consume daily and save it!

· Before washing your plate, scrape it clean into the trash first, so you avoid grease going into the kitchen drain.

· Minimize the number of herbicides and fertilizers used in the land fields.

· Change your eating habits. By cutting down on meat and dairy and eating seasonal vegetables, you’ll help conserve water.

And don’t forget to celebrate the #WorldWaterDay next Monday, March 22nd 2021, by just doing one small gesture for saving this precious source of life.