18 Mar Scientific Realism: Is There No Alternative? 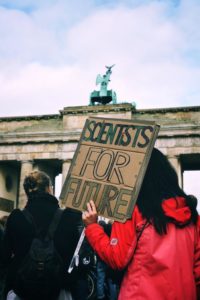 The current political-economic system we live in has a crucial influence on labour relations of scientists (and here I include postgraduate students, professional researchers and university professors). As many other workers, scientists use their time and craft to produce something – commonly called a commodity. Depending on the value society gives to this commodity, workers who are responsible for its creation can go up or down in their careers and be more or less disputed by the market. To employers, the available working force presents itself as commodities on a shelf waiting to be hired based on their attributes. Websites such as LinkedIn illustrate the effort people make to showcase their professional experiences and skills in order to be seen by their peers, increase their network and obtain better career opportunities.

The value of scientists is often measured by their productivity – and a considerable part of that is represented by their list of publications. The academic article is the quintessential commodity of science1. To the marketplace, a researcher who worked for a decade but published nothing pales in comparison to a colleague who managed to publish a couple of articles in a year – regardless of the scientific knowledge both may have, the social-economic context of each person or the actual content of the articles themselves. This generates the well-known “publish or perish” culture in academia, which pushes scientists to publish to obtain further grants and funding for their projects and/or even to keep their own jobs. In his book “Capitalist Realism”, the philosopher Mark Fisher states that a paralysing anti-productive bureaucracy disguises itself in our society as a meritocratic logic of productivity:

“The drive to assess the performance of workers and to measure forms of labour which, by their nature, are resistant to quantification, has inevitably required additional layers of management and bureaucracy. What we have is not a direct comparison of workers’ performance or output, but a comparison between the audited representation of that performance and output. Inevitably, a short-circuiting occurs, and work becomes geared towards the generation of representations rather than to the official goals of the work itself.”2

The “publish or perish” culture echoes the work of Guy Débord “The Society of the Spectacle”, in which the history of society can be understood as “the decline of being into having, and having into merely appearing”3.

In the current scenario of ever-more precarious working conditions, Fisher writes: “The slogan (…) is ‘no long term’, where formerly workers could acquire a single set of skills and expect to progress upwards through a rigid organizational hierarchy, now they are required to periodically re-skill as they move from institution to institution, from role to role.”2. The nature of scientific investigation is at odds with this frantic moving from one contract to another. Research (even for experienced scientists) involves a constant effort of learning complex new skills and concepts, which often cannot be done in a short time. Trying to fit experimental results – which are inherently uncertain – into the rigidity of official reports that demand the accomplishment of previously-set goals (on which your job depends) is a fertile ground to scientific misconduct, anxiety and depression4. Given our society’s ethos of hyper-individualization of responsibility for our professional success or failure, we become our own fiercest critics and worst saboteurs2.

Although this would be enough to show how problematic the current labour relations in science are, unfortunately there is more. Academic journals and publishing houses are not non-profit entities. The largest publishers make billions of dollars every year5. This profit partially comes from charging scientists to have access to articles written by other scientists and peer-reviewed by some other scientists; all that while publishers pay none of the scientists involved in this process. Open access principles and practices may have promised free-of-charge access to publications, but publishers charge exorbitant fees for this option. The top journals may charge up to 9500 euros6 for an open-access publication. For the sake of comparison, this value represents the average net salary of 2 years obtained by a PhD student in my country (Brazil)7. This leads to: 1) a considerable amount of public resources dedicated to science and technology ending up in the hands of these publishers (In the EU, 30% of all revenue in R&D comes from public funds8); 2) an ever-growing gap between research groups from rich and poor countries. In this context, common-place expressions of the academia such as “scientific neutrality” and “meritocracy” lose all their meaning.

Ultimately, the value of scientists in the marketplace and their access to qualified positions are symbiotic with (or parasitized by) the profits of publishing companies. If it wasn’t for copyright-breaching initiatives such as Sci-Hub, which is target to constant blocks and lawsuits by publishers9, the same would have happened to dissemination of scientific knowledge itself.

Many among us are aware of how rigged this system is, but most will scoff at its shortcomings – as if the game’s rules simply fell out of the sky or nothing could be done. The expression “Publish or perish” becomes the order of the day among scientists, repeated ad nauseam and devoid of the criticism it initially contained. More than 30 years ago, the philosopher Slavoj Žižek described how such attitude, instead of a form of resistance, is a coping mechanism:

“The prevailing ideology is that of cynicism. (…) Its fundamental level is not of an illusion masking the real state of things but that of an unconscious fantasy structuring our social reality itself. (…) Cynical distance is just one way to blind ourselves (…): even if we do not take things seriously, we are still doing them”10.

This scepticism resonates with Margaret Thatcher’s famous neoliberal motto “there is no alternative”. The dominant ideology of cynicism limits not only our actions but, mainly, our capacity to imagine different possibilities – which is fundamental for a scientist or anyone else wishing to live in a better society. I would like to end this text with a quote from the professor of the University of Sorbonne in Paris, Anna Geppert:

“However, unlike the proletarian worker who has little power and choices, we are building our cage all by ourselves. We spend an always increasing amount of time applying for grants, managing, reporting, evaluating. We hate the tyranny of metrics and impact factors, yet we keep submitting papers to high ranking journals. We write, edit, review and read academic literature, yet we pay for open access. We live with a prisoner’s dilemma: can we get off the hamster wheel if we don’t know what others will do?”11.