24 Jul Journey to the Darkness 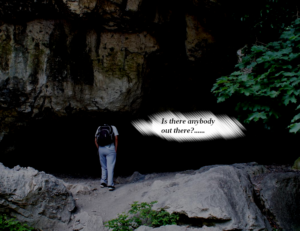 It’s been a long trip for me. Now, even though I feel exhausted, I’m ready to start a new challenge. This is how my life is going…

I heard that She ran away and now is hiding in the deepest cave. I understand that feeling – they built her an armor for fighting with the Everywhere Demons, but She didn’t manage to control herself and escaped. Probably, I’d do the same if someone pushes me that hard.

I think that She needs a friend to relate, not a boss, and I’ve got the feeling that I could be that one. That’s the reason for my journey! That’s my destiny! I can feel her confusion as I’m getting closer.

From time to time, when I get lost, I get the advice of the Happy Tree. Last time he mentioned that if I’m able to see all her faces, She could take to the battlefield for fighting the Everywhere Demons.

Finally, I’m here, in front of the cave. I can’t see anything in the darkness, but I know that this is her house. It’s time to knock the door:

– Is there anybody there?

– Go away! I can kill you, and I will if you’re not careful. I won’t let you use my powers to solve your problems. I just want to live a quiet life in freedom, and to enjoy as much nature as I deserve. You wouldn’t understand who I am.

– I don’t wanna use you! I admire you and I want to understand you. If you feel you’re going into battle after this, that’s up to you. I just wanna help you.

-Even if you have good intentions. The door is closed and all of me can’t go out. But, I’ll let you take a small piece of me with you. As soon you prove that you can take care of me, the door will be open.

My human nature is so limited. Even with a part of her with me, it’s so hard to accept that She is everywhere. I just need some quiet place for letting this piece to grow and look for answers.

– Wherever She is, wherever you should be. She doesn’t need armor or a mask. She just needs time.

Again! Happy Tree’s advice could be as confusing as useful. What does time mean to a being who’s been here before humans?

Now it’s been several months since we became partners. I realized that the longer we stay in the same place, the bigger and stronger She gets.

Only now I understand the message from the Tree. She has as many faces as places are in the earth, and with time, She will make a house there. That could mean that if I chose the correct place for her, She would be able to face the demons. Now my question is how I choose the right place? Should I try countless places?

Maybe it would be easier to start with the place where the Everywhere Demons were born. They were human creation and the raw material is still there. We could go there and see what would happen if She faces them. I think that they would be curious about each other and they will cooperate instead of fighting.

That’s in an old temple and I’m not too far. Not after this journey.

Now I’m standing in front of a huge door that I don’t know how to open it.

“KNOW THYSELF” is engraved in large letters on the door. I don’t know if that’s about her or me. But I must find a way to open it.

By adding some water, I can see some carving signals on the door. It’s difficult to read it, it would be better to clean it. Four possible pathways that She could follow just appeared. That’s all I got and the only thing left is to try…

The powerful being (She) is a metaphor of the bacterial community, and the battlefields are the environments where that community can express enzymes for trace organic chemicals (TOrCs) degradation. In fact, TOrCs represent the Everywhere Demons, and this is my journey looking for getting insight into the hidden world of microbial metabolism for TOrCs removal.

At this point in my project, I’m performing microbial adaptation to different substrates in order to evaluate the degradation of TOrCs in the future. But as you may be noticed from my short story, this is just the beginning…